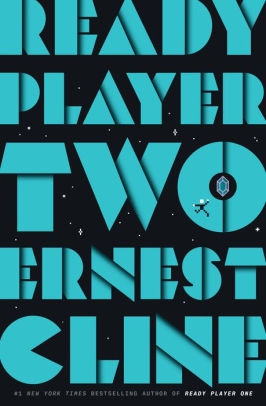 The exciting sequel to Ready Player One, the 2012 blockbuster!

Admittedly I had not heard about Ready Player One or Ernest Cline until I saw the movie that came out a few years ago. I really enjoyed the movie and so I am really anticipating a sequel. I figured it would be a great idea to read the novel sequel since I will then be able to compare any differences once the movie comes out! This novel goes back to the world of OASIS and the fallout from Ready Player One.

As stated on the Barnes and Noble website, the summary for Ready Player Two is:

"AN UNEXPECTED QUEST. TWO WORLDS AT STAKE. ARE YOU READY?

Hidden within Halliday’s vaults, waiting for his heir to find, lies a technological advancement that will once again change the world and make the OASIS a thousand times more wondrous—and addictive—than even Wade dreamed possible.

With it comes a new riddle, and a new quest—a last Easter egg from Halliday, hinting at a mysterious prize.

And an unexpected, impossibly powerful, and dangerous new rival awaits, one who’ll kill millions to get what he wants.

Wade’s life and the future of the OASIS are again at stake, but this time the fate of humanity also hangs in the balance."

If anyone else is interested in checking out the book Ready Player Two by Ernest Cline, click the image up above! It is currently on sale for 24% off.

- 24% off
- The sequel to the blockbuster hit, Ready Player One
- A Barnes and Noble Bestseller

I really enjoyed watching the movie Ready Player One so I am quite excited to read the novel of what the sequel movie will be based off of!

Tags:
Ready Player Two, Ready Player One, Book, Novel, Ernest Cline, Barnes and Noble
Leave a Note.
Must be logged in to comment
Previous Fave
Next Fave
Sharing is good
Faved November, 11 2020 by: