The 6:20 Man by David Baldacci 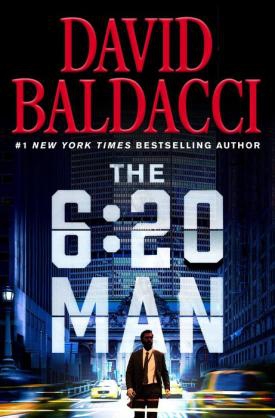 I was looking for a new book to add to my summer reads list on Barnes and Noble. The cover for The 6:20 Man by David Baldacci really caught my eye so I decided to look into it. I'm a fan of David Baldacci's other novels so this one will likely be up to par as well. This new thriller book has some great reviews and sounds quite riveting, so I will definitely be grabbing a copy this summer!

As stated on the Barnes and Noble website, the summary for The 6:20 Man is:

"Every day without fail, Travis Devine puts on a cheap suit, grabs his faux-leather briefcase, and boards the 6:20 commuter train to Manhattan, where he works as an entry-level analyst at the city’s most prestigious investment firm. In the mornings, he gazes out the train window at the lavish homes of the uberwealthy, dreaming about joining their ranks. In the evenings, he listens to the fiscal news on his phone, already preparing for the next grueling day in the cutthroat realm of finance. Then one morning Devine’s tedious routine is shattered by an anonymous email: She is dead.

Sara Ewes, Devine’s coworker and former girlfriend, has been found hanging in a storage room of his office building—presumably a suicide, at least for now—prompting the NYPD to come calling on him. If that wasn’t enough, before the day is out, Devine receives another ominous visit, a confrontation that threatens to dredge up grim secrets from his past in the army unless he participates in a clandestine investigation into his firm. This treacherous role will take him from the impossibly glittering lives he once saw only through a train window, to the darkest corners of the country’s economic halls of power . . . where something rotten lurks. And apart from this high-stakes conspiracy, there’s a killer out there with their own agenda, and Devine is the bull’s-eye."

If anyone else is interested in checking out the book The 6:20 Man by David Baldacci, David Ellis, click the image up above!

I can't wait to check out this book during the cool summer evenings. It has stellar reviews and has newly been released.

Tags:
The 6:20 Man, Book, Novel, David Baldacci, Thriller, Barnes and Noble
Leave a Note.
Must be logged in to comment
Previous Fave
Next Fave
Sharing is good
Faved July, 13 2022 by: