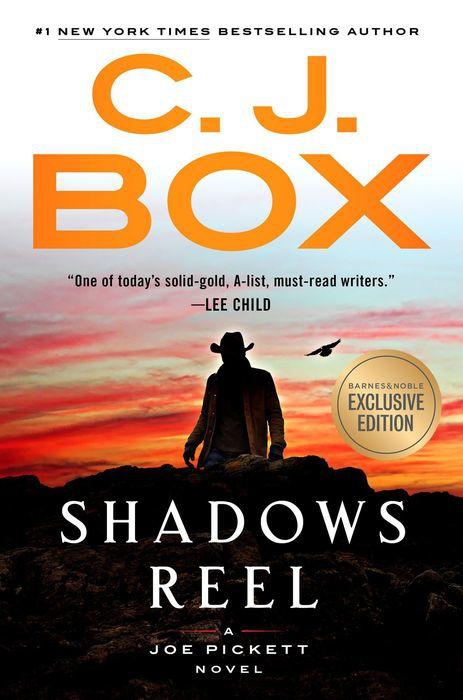 A thrilling new novel in the bestselling Joe Pickett Series!

While browsing for new bestselling books, I came across the novel Shadows Reel by C. J. Box. I've read some novels in the Joe Pickett Series by C. J. Box before and they were quite good, and after some reading, there are an overwhelming amount of positive reviews. I think it would make a great spring time read!

As stated on the Barnes and Noble website, the summary for C. J. Box is:

"A day before the three Pickett girls come home for Thanksgiving, Marybeth Pickett finds an unmarked package at the front door of the library where she works. When she opens the package she finds a photo album that belonged to an infamous Nazi official. Who left it there? And why did they leave it with her?

She learns that during World War II several Wyoming soldiers were in the group that fought to Hitler’s Eagles Nest retreat in the Alps—and one of them took Hitler’s personal photo album. Did another take this one and keep it all these years? When she finds the name of a deceased local man who was likely in the unit, Joe visits the man’s son—only to find him brutally tortured and murdered. Someone is after the photo album—but why? And when a close neighbor is murdered, Joe and Marybeth face a new question: How will they figure out the book’s mystery before someone hurts them…or their girls?

Meanwhile, Nate Romanowski is on the hunt for a younger and more ruthless version of himself—the man who stole Nate’s falcons and attacked his wife. Using a network of fellow falconers, Nate tracks the man from one city to another, learning that his target is an agitator and a financier of anarchists. Even as he grasps the true threat his quarry presents, Nate swoops in for the kill—and a stunning final showdown."

If anyone else is interested in checking out the book Shadows Reel by C. J. Box, click the image up above! It is currently on sale for 32% off!

I can't wait to check out this novel! I hope it holds up to all the excellent reviews I have read.