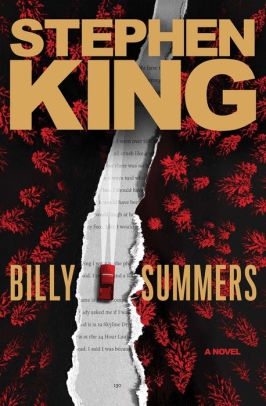 I've been working on my next list of summer novels to read, and as such I was browsing the pre-order books on Barnes and Noble. I was happy to see the listing for Billy Summers by Stephen King! Stephen King is such an excellent storyteller, I always feel like his novels are thrilling and I can never seem to put the books down. The early reviews for this novel are already spectacular, so I am looking forward to the release of this novel!

As stated on the Barnes and Noble website, the summary for Billy Summers is:

"Billy Summers is a man in a room with a gun. He’s a killer for hire and the best in the business. But he’ll do the job only if the target is a truly bad guy. And now Billy wants out. But first there is one last hit. Billy is among the best snipers in the world, a decorated Iraq war vet, a Houdini when it comes to vanishing after the job is done. So what could possibly go wrong?

This spectacular can’t-put-it-down novel is part war story, part love letter to small town America and the people who live there, and it features one of the most compelling and surprising duos in King fiction, who set out to avenge the crimes of an extraordinarily evil man. It’s about love, luck, fate, and a complex hero with one last shot at redemption.

You won’t put this story down, and you won’t forget Billy."

If anyone else is interested in checking out the book Billy Summers by Stephen King, click the image up above! The book is currently on sale for 20% off.

I can't wait to dive into this novel later this year! I hope it's every bit as good as his previous releases.

Tags:
Billy Summers, Book, Novel, Stephen King, Barnes and Noble
Leave a Note.
Must be logged in to comment
Previous Fave
Next Fave
Sharing is good
Faved June, 03 2021 by: