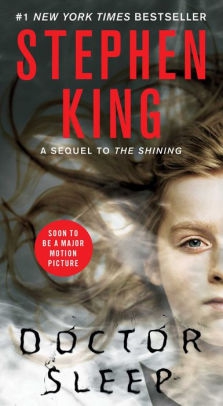 Soon to be a major motion picture starring Ewan McGregor!

I have been seeing many trailers for the new major motion picture of Doctor Sleep by Stephen King coming out, which stars Ewan McGregor - one of my favorite actors. I decided I should read the book first before seeing it!

Doctor Sleep is the terrifying sequel to The Shining. I have read and seen The Shining, and absolutely loved it, so I'm sure this will be just as good, if not better.

As stated on the Barnes and Noble website, the summary for Doctor Sleep is:

"Years ago, the haunting of the Overlook Hotel nearly broke young Dan Torrance’s sanity, as his paranormal gift known as “the shining” opened a door straight into hell. And even though Dan is all grown up, the ghosts of the Overlook—and his father’s legacy of alcoholism and violence—kept him drifting aimlessly for most of his life. Now, Dan has finally found some order in the chaos by working in a local hospice, earning the nickname “Doctor Sleep” by secretly using his special abilities to comfort the dying and prepare them for the afterlife. But when he unexpectedly meets twelve-year-old Abra Stone—who possesses an even more powerful manifestation of the shining—the two find their lives in sudden jeopardy at the hands of the ageless and murderous nomadic tribe known as the True Knot, reigniting Dan’s own demons and summoning him to battle for this young girl’s soul and survival..."

If anyone else is interested in checking out the book Doctor Sleep by Stephen King, please click the image up above! It is currently on sale for 10% off, I can't wait to read it.

Tags:
Doctor Sleep, The Shining, Ewan McGregor, Novel, Book, Stephen King
Leave a Note.
Must be logged in to comment
Previous Fave
Next Fave
Sharing is good
Faved October, 15 2019 by: