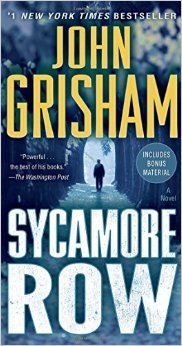 Seth Hubbard is a wealthy man dying of lung cancer. He trusts no one. Before he hangs himself from a sycamore tree, Hubbard leaves a new, handwritten will. It is an act that drags his adult children, his black maid, and Jake into a conflict as riveting and dramatic as the murder trial that made Brigance one of Ford County’s most notorious citizens, just three years earlier.

Liam Wilson into Books to read
over 7 years ago

Hailey Jones into Books to read
over 7 years ago
Refave
Previous Fave
Next Fave
Sharing is good
Faved September, 09 2014 by:

Burlington, ON, CA
11 followers, following 0
Follow
Faved into the Collection: