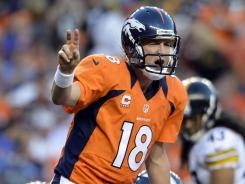 Peyton Manning is an American football quarterback for the Denver Broncos of the NFL. He played for the Indianapolis Colts for 14 seasons from 1998–2011. Peyton is the son of former NFL quarterback Archie Manning and an elder brother of New York Giants quarterback Eli Manning.
Manning played college football at the University of Tennessee, leading the Volunteers to the 1997 SEC Championship in his senior season.
Manning was chosen by the Indianapolis Colts with the first overall pick in the 1998 NFL Draft.
From 1998 to 2010, he led the Colts to eight division championships, two AFC championships, and to a Super Bowl championship.
Peyton Manning is one the best quarterbacks to ever play in the NFL and my personal all time favorite.

Mia Miller into Fave Athletes
over 6 years ago

Blake Griffen into Greatest athletes of all time
over 8 years ago
Refave
Previous Fave
Next Fave
Sharing is good
Faved January, 02 2013 by: