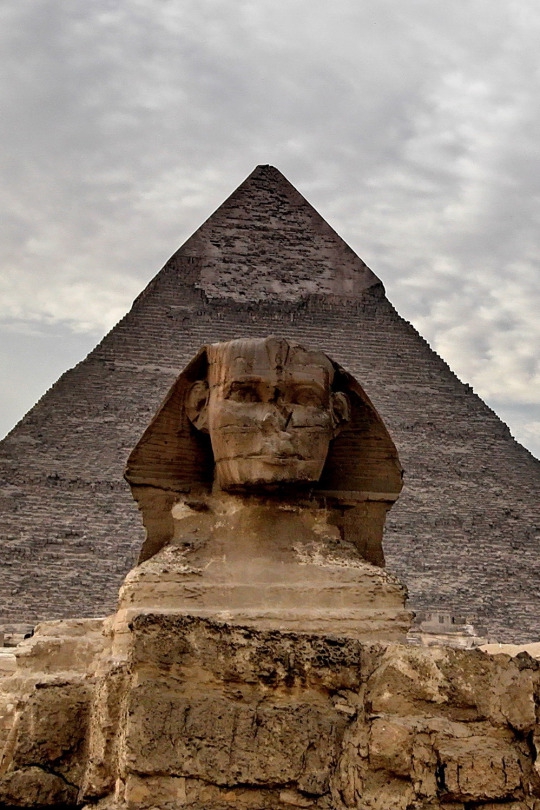 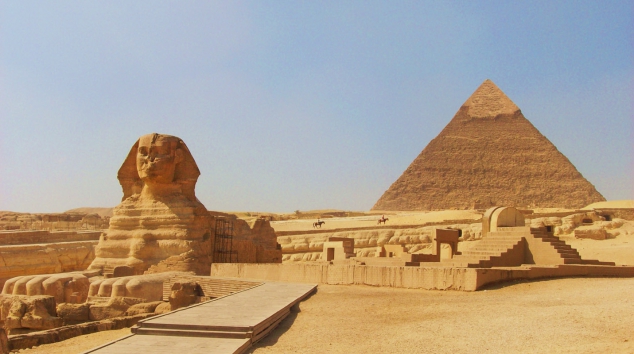 The Ancient Egyptian wonders of the world in Giza, Egypt

The Pyramid of Khafre is the second tallest and second largest of the Ancient Egyptian Pyramids of Giza. It was built by Khafre, the son of pharaoh Khufu who built the first Great Pyramid. Despite being slightly smaller than the nearby Great Pyramid, the Pyramid of Khafre was built on a higher plateau which creates the illusion of a larger size. The interior is a lot simpler than that of Khufu's pyramid, however the mortuary temple at the base of the pyramid was much more elaborate. The complex to this day has survived in much better condition than that of the other Great Pyramids. In fact, the Pyramid of Khafre is the first pyramid to have all five elements of a mortuary temple in one place. Later pyramids would take on a highly decreased size but with a greater focus on mortuary temples. The Great Pyramids were once encased in polished limestone and it has been said it reflected the light of the sun brilliantly. Despite being having the limestone mostly stripped away, the Pyramid of Khafre still retains some of the casing stones at the base. I would love to be able to see the magnificent sights and examples of humankind's ingenuity.

Khafre's necropolis boasted an unparalleled abundance of monuments and statues. Among them is the colossal Great Sphinx, one of the world's largest and oldest statues still shrouded in mystery. The Sphinx portrays a human-headed lion wearing the headdress of the pharaohs and many believe this is the embodiment of Khafre, due to the close proximity to the Pyramid of Khafre. The topic of the Great Sphinx of Giza is still subject to many debates, with no answers on when it was built, by whom and why? Perhaps that is what makes this wonder of the world so alluring. I would love to see the necropolis' of Giza, it is definitely on my bucket list.

Tags:
Great Sphinx of Giza, Pyramid of Khafre, Egypt, Ancient Egyptian, Pyramids
Leave a Note.
Must be logged in to comment
Previous Fave
Sharing is good
Faved December, 07 2016 by: