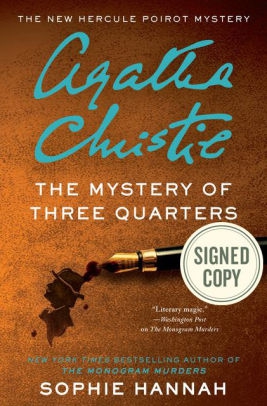 A stylish, diabolically clever mystery set in the London of 1930!

Sophie Hannah brings Hercule Poirot - the star of Agatha Christie's 'Murder on the Orient Express' and 'The Monogram of Murders' - back in a clever mystery for 'The Mystery of Three Quarters'.

Gillian Flynn, author of 'Gone Girl', commented this about the book: "Sophie Hannah had a massive challenge in reviving the beloved Poirot, and she met it with heart and no small amount of little grey cells. I was thrilled to see the Belgian detective in such very, very good hands."

As a long time lover of Gillian Flynn's books, it makes me even more excited to read 'The Mystery of Three Quarters'.

As stated on the Barnes & Noble website, the summary for 'The Mystery of the Three Quarters' is:

"Hercule Poirot returns home after an agreeable luncheon to find an angry woman waiting to berate him outside his front door. Her name is Sylvia Rule, and she demands to know why Poirot has accused her of the murder of Barnabas Pandy, a man she has neither heard of nor ever met. She is furious to be so accused, and deeply shocked. Poirot is equally shocked, because he too has never heard of any Barnabas Pandy, and he certainly did not send the letter in question. He cannot convince Sylvia Rule of his innocence, however, and she marches away in a rage.

Shaken, Poirot goes inside, only to find that he has a visitor waiting for him — a man called John McCrodden who also claims also to have received a letter from Poirot that morning, accusing him of the murder of Barnabas Pandy...

Poirot wonders how many more letters of this sort have been sent in his name. Who sent them, and why? More importantly, who is Barnabas Pandy, is he dead, and, if so, was he murdered? And can Poirot find out the answers without putting more lives in danger?"

If anyone else is interested in checking out the book 'The Mystery of the Three Quarters' by Sophie Hannah, please click on the source link up above!

Tags:
The Mystery of Three Quarters, Hercule Poirot Series, Sophie Hannah
Leave a Note.
Must be logged in to comment
Previous Fave
Next Fave
Sharing is good
Faved July, 23 2018 by: