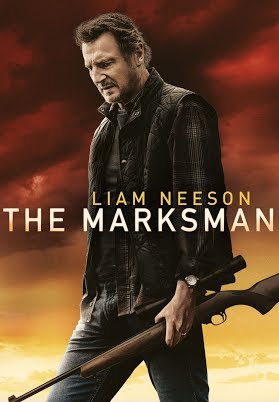 I am a huge fan of Liam Neeson ever since seeing him in some of his best movies, such as Star Wars, Schindler's List, and Taken. When I saw he was in The Marksman (2021) I knew I had to give it a shot. I'm glad I did, because this movie was all kinds of epic! It has a great story, lots of thrills and action, and is well-made overall.

The description of The Marksman (2021), as stated on iTunes, is:

"Ex-Marine and hardened Arizona rancher Jim Hanson (Liam Neeson) simply wants to be left alone as he tries to make a living on an isolated stretch of borderland. But everything changes when he witnesses 11-year-old migrant Miguel and his mother fleeing from a band of assassins sent by a ruthless drug cartel. After being caught in a shootout, Miguel's mother begs Jim to take her son to the safety of their family in Chicago. Defying law enforcement, Jim and Miguel hit the road and slowly begin to forge an unlikely friendship while the cartel's relentless assassins blaze a bloody trail, hot on their heels."

If anyone is interested in checking out the movie The Marksman (2021) from Open Road Films, click on the image up above. It's an excellent action and adventure movie.

- Action and adventure thriller movie
- Great cast, starring Liam Neeson
- Not too long but not too short
- Thought provoking

I had a great time watching this movie with my family over the weekend. I think it's a great movie for fans of Liam Neeson or those who enjoy a decent-length action adventure thriller.

Tags:
The Marksman (2021), The Marksman, Liam Neeson, Action and Adventure Movie, Movie, Open Road Films, iTunes,
Leave a Note.
Must be logged in to comment
Previous Fave
Next Fave
Sharing is good
Faved July, 06 2021 by: