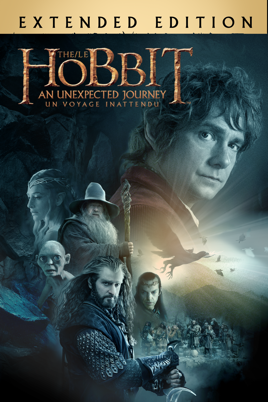 I recently re-watched The Hobbit: An Unexpected Journey (Extended Edition) the other night, and was surprised how great the movie held up in comparison to the later entries into the saga. This extended version is chock full of fun bits that the original release missed out on, so it's quite the treat to re-watch if you had not already seen the extended version.

The description of The Hobbit: An Unexpected Journey (Extended Edition), as stated on iTunes, is:

"This Extended adventure follows Bilbo Baggins, who is swept into an epic quest to reclaim Erebor with the help of Gandalf the Grey and 13 Dwarves led by the legendary warrior, Thorin Oakenshield. Their journey will take them through treacherous lands swarming with Goblins, Orcs and deadly Wargs, as well as a mysterious and sinister figure known only as the Necromancer. Although their goal lies to the East and the wastelands of the Lonely Mountain, first they must escape the Goblin tunnels, where Bilbo meets the creature that will change his life forever...Gollum. Here, alone with Gollum, on the shores of an underground lake, the unassuming Bilbo Baggins not only discovers depths of ingenuity and courage, he also gains possession of Gollum's "precious" ring that holds unexpected and useful qualities...A simple, gold ring that is tied to the fate of all Middle-earth in ways Bilbo cannot begin to know."

If anyone is interested in checking out The Hobbit: An Unexpected Journey (Extended Edition) from Warner Bros., click on the image up above.

I really enjoyed this movie almost as much as I did The Lord of The Rings. I recommend it for fans of Middle-earth and Tolkien tales.