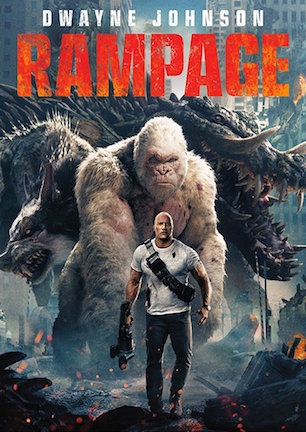 I really enjoyed the movie Rampage (2018) from Warner Bros. Studio. It has numerous great actors, such as Dwayne Johnson and Jeffrey Dean Morgan, and is based off excellent source material. Essentially it's a movie of three different animals that had gotten infected with a dangerous pathogen, and a primatologist and geneticist team up to stop them from destroying Chicago.

"Primatologist Davis (Dwayne Johnson) shares an unshakable bond with George, the extraordinarily intelligent, silverback gorilla who has been in his care since birth. When a greed-fueled corporation's genetic experiment goes awry, George and other animals across the country are mutated into aggressive super creatures that rampage the city. In an adrenaline-filled ride, Davis tries to find an antidote to not only halt a global catastrophe, but to also save the fearsome creature that was once his friend."

If anyone is interested in checking out Rampage (2018) from Warner Bros., click on the image up above. I really recommend it, it was a great movie!

I think Rampage (2018) was a really great movie! If you love action-packed big monsters, I suggest giving it a watch.

Tags:
Rampage, Dwayne Johnson, Movie, Warner Bros.
Leave a Note.
Must be logged in to comment
Previous Fave
Next Fave
Sharing is good
Faved October, 31 2018 by: