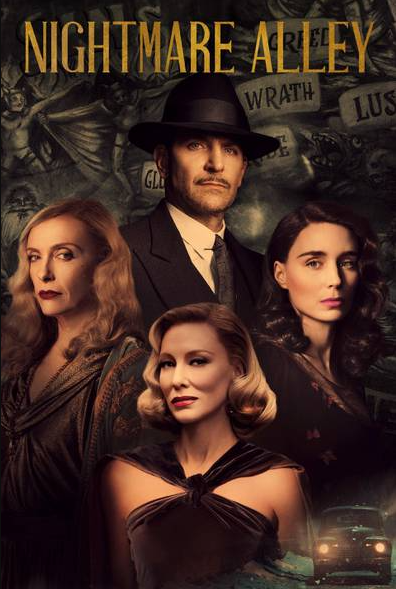 I've been interested in watching the movie Nightmare Alley (2021) since I had heard it came out. I finally had some time to sit down and give it a watch, and I must say, I was quite impressed! I am a long-time fan of Guillermo Del Toro as is, but when you add in some excellent actors such as Bradley Cooper, Cate Blanchett, it definitely became a must-watch.

The description of Nightmare Alley (2021), as stated on iTunes, is:

"From visionary filmmaker Guillermo del Toro comes this noir-style psychological thriller starring Bradley Cooper and Cate Blanchett that’s set against the dark backdrop of carnival life. When charismatic but down-on-his-luck Stanton Carlisle (Cooper) endears himself to clairvoyant Zeena (Toni Collette) and her has-been mentalist husband Pete (David Strathairn) at a traveling carnival, he crafts what seems to be a golden ticket to success. The more he uses his newly acquired knowledge to grift the wealthy elite of 1940s New York society, the more his ambition grows. Soon, with the virtuous Molly (Rooney Mara) loyally by his side, Stanton plots to con a dangerous tycoon (Richard Jenkins) with the aid of a mysterious psychiatrist (Blanchett), who might turn out to be his most formidable opponent yet. Also included in the all-star cast of NIGHTMARE ALLEY are Willem Dafoe, Ron Perlman and Mary Steenburgen. Master storyteller del Toro directed the taut thriller, which he co-wrote with Kim Morgan, based on the novel by William Lindsay Gresham."

The movie was a stellar brutal psychological terror, as expected from Guillermo del Toro. I highly recommend this movie if you're a fan of his work or are looking for a captivating dark thriller.

If anyone is interested in checking out the movie Nightmare Alley (2021) from Double Dare You, click on the image up above.

I cannot recommend this movie enough. It kept me on the edge of my seat the entire time. So many twists and turns, thrills, and dark scenes. If you're a fan of del Toro or psychological thrillers, this is the movie for you!