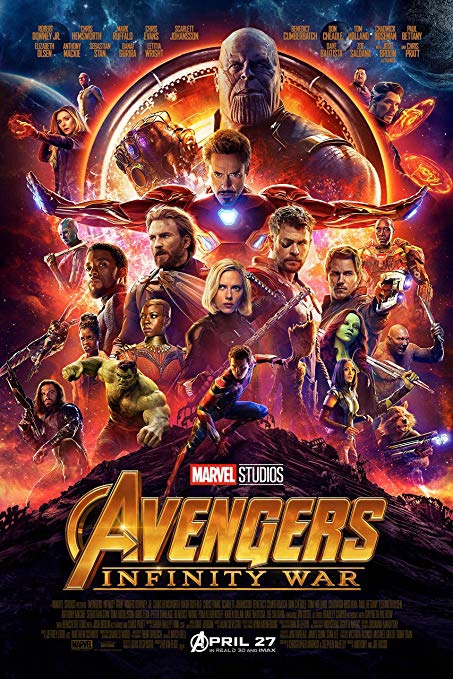 The world's fourth-highest-grossing film of all time!

The Avengers: Infinity War movie, produced by Anthony Russo and Joe Russo, is my all time favourite Marvel Studios movie. It featured a dizzying array of MCU heroes in the fight against their gravest threat, and the result is absolutely thrilling and emotional! I won't spoil it for you, but it's a definite must-watch.

The description of Avengers: Infinity War, as stated on iTunes, is: "An unprecedented cinematic journey ten years in the making and spanning the entire Marvel Cinematic Universe, Marvel Studios’ Avengers: Infinity War brings to the screen the ultimate, deadliest showdown of all time. The Avengers and their Super Hero allies must be willing to sacrifice all in an attempt to defeat the powerful Thanos before his blitz of devastation and ruin puts an end to the universe."

If anyone is interested in checking out the Avengers: Infinity War movie, click on the image up above! I definitely recommend it. It was such an amazing movie.

- A powerful, thrilling plot line that has an emotional ending.
- Features a huge amount of MCU heroes.
- Did superbly well in the box office.
- Amazing cast and directors.

I love this movie. It takes you places that most superhero movies don't and where you may not even want to go!