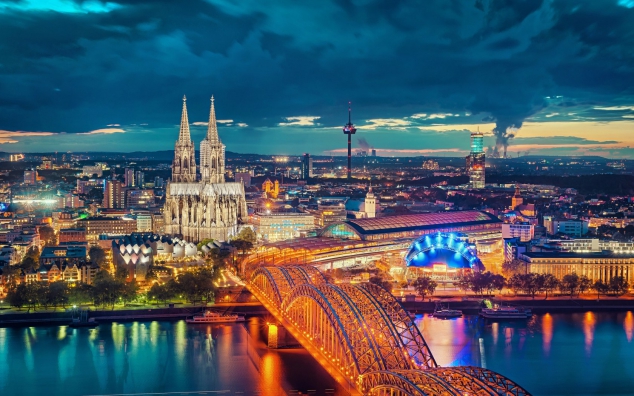 In first century AD Cologne was founded as the Roman Colonia Claudia Ara Agrippinensium. It is from this that it derives its name. The French version of the city's name, "Cologne", has become standard in English as well.

Located less than eighty kilometres from Belgium, in western Germany, Cologne is a 2,000-year-old city spanning both sides of the Rhine River.

Cologne was one of the most heavily bombed cities in Germany during World War II. The bombing obliterated the almost the entire city and reduced the population by 95%; mainly due to evacuation.

With the intention of restoring as many historic buildings as possible, the successful postwar rebuilding has resulted in a very mixed and unique cityscape. Today Cologne hosts more than thirty museums and hundreds of galleries making it a major cultural centre for the Rhineland.

The city's famous Cologne Cathedral (Kölner Dom) is the seat of the Catholic Archbishop of Cologne. Cologne is also home to one of Europe's oldest and largest universities - the University of Cologne (Universität zu Köln).