The House on Vesper Sands by Paraic O'Donnell 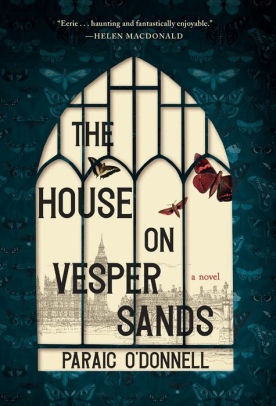 A rich novel that offers a glimpse into the strange undertow of the late nineteenth-century London and secrets that lie hidden!

I recently saw some reviews for The House on Vesper Sands by Paraic O'Donnell on Barnes and Noble, and now I have a big desire to read the novel myself. It sounds so interesting and mysterious, I love the Victorian era and even moreso the mystery genre. It sounds richly atmospheric and features a strong female lead.

As stated on the Barnes and Noble website, the summary for The House on Vesper Sands is:

"London, 1893: high up in a house on a dark, snowy night, a lone seamstress stands by a window. So begins the swirling, serpentine world of Paraic O’Donnell’s Victorian-inspired mystery, the story of a city cloaked in shadow, but burning with questions: why does the seamstress jump from the window? Why is a cryptic message stitched into her skin? And how is she connected to a rash of missing girls, all of whom seem to have disappeared under similar circumstances?

On the case is Inspector Cutter, a detective as sharp and committed to his work as he is wryly hilarious. Gideon Bliss, a Cambridge dropout in love with one of the missing girls, stumbles into a role as Cutter’s sidekick. And clever young journalist Octavia Hillingdon sees the case as a chance to tell a story that matters—despite her employer’s preference that she stick to a women’s society column. As Inspector Cutter peels back the mystery layer by layer, he leads them all, at last, to the secrets that lie hidden at the house on Vesper Sands.

By turns smart, surprising, and impossible to put down, The House on Vesper Sands offers a glimpse into the strange undertow of late nineteenth-century London and the secrets we all hold inside us."

If anyone else is interested in checking out the book The House on Vesper Sands by Paraic O'Donnell, click the image up above! It is currently on sale for 22% off.

I am really looking forward to diving into this novel. It sounds so intriguing. I am a big fan of Victorian mysteries!

Tags:
The House on Vesper Sands, Book, Novel, Paraic O'Donnell, Barnes and Noble,
Leave a Note.
Must be logged in to comment
Previous Fave
Next Fave
Sharing is good
Faved January, 22 2021 by: