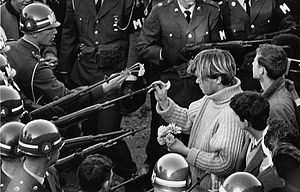 Flower Power" is an historic photograph taken by photographer Bernie Boston for the now-defunct Washington Star, nominated for the 1967 Pulitzer Prize. Taken on October 21, 1967 during a march to the Pentagon, the iconic photo shows a young, long-haired Vietnam protestor in a turtleneck sweater, placing carnations into the barrel of a rifle of a National Guardsman.

Tags:
Flower power by Bernie Boston, flower power, Bernie Boston
Leave a Note.
Must be logged in to comment
Previous Fave
Next Fave
Sharing is good
Faved December, 10 2013 by: