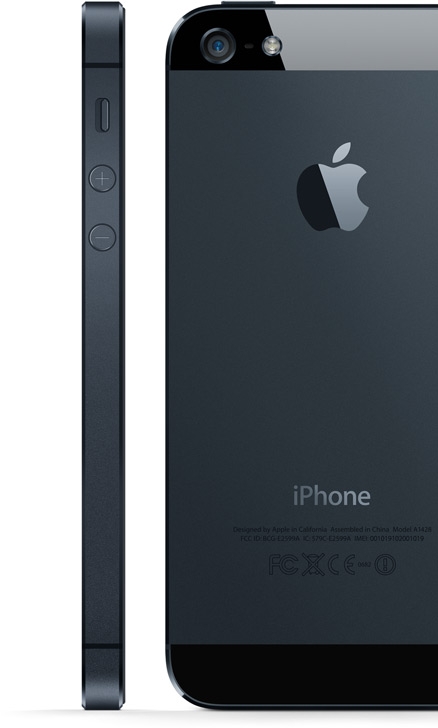 Here's a quick snapshot of some of the key features of the all-new iPhone 5...

The new iPhone 5 is taller with the Retina Display expanded from 3.5 inches to 4 inches and it now has a 16:9 aspect ratio. Although taller the iPhone 5 is 18 percent thinner and 20 percent lighter than the iPhone 4S. Maybe because of complaints about the easily damaged glass back of the 4S Apple has returned to a metal back that reminds me of the original iPhone.

Most importantly the new iPhone 5 will support 4G LTE networks in addition to the current support for GPRS, EDGE, EV-DO, and HSPA data networks. This is key because no matter how great the hardware if Apple's iPhone had slow connectivity they would be letting their competition pass them by.

The iPhone 5 gets a faster chip called the A6. The A6 chip is two times faster than the current A5 chip. According to Apple, users will see Web pages load 2.1 times faster.

The redesigned iPhone 5 has a new dock connector called "Lightning" which is significantly smaller. I'm sure this is going to annoy owners of current speaker docks, accessories, and charger/syncing cables since it will make them obsolete.

On the software side the iPhone 5 ships with the new iOS 6 installed.

John Robinson into Phones
over 9 years ago

Joseph Becker into My tech faves
over 9 years ago

Christine Cox into Most fave products
over 9 years ago
Refave
Previous Fave
Next Fave
Sharing is good
Faved September, 13 2012 by: