Sign In
Sign Up
FaveThing -> Jacob Manning -> My team -> Manning Bowl 2013: Peyton & the Broncos get better of Eli's Giants

Manning Bowl 2013: Peyton & the Broncos get better of Eli's Giants 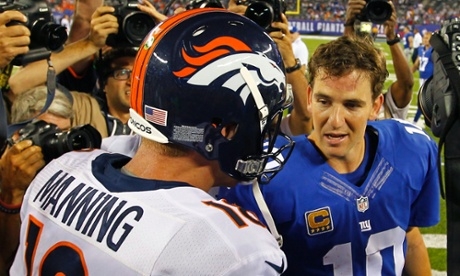 Peyton is 3-0 against younger brother Eli in regular-season games after Denver's 41-23 rout Sunday of the New York Giants.
With Manning finding Wes Welker and Julius Thomas for touchdowns, and Moreno scoring on sprints down the right side, Denver dominated much of the matchup between Super Bowl MVP quarterbacks.