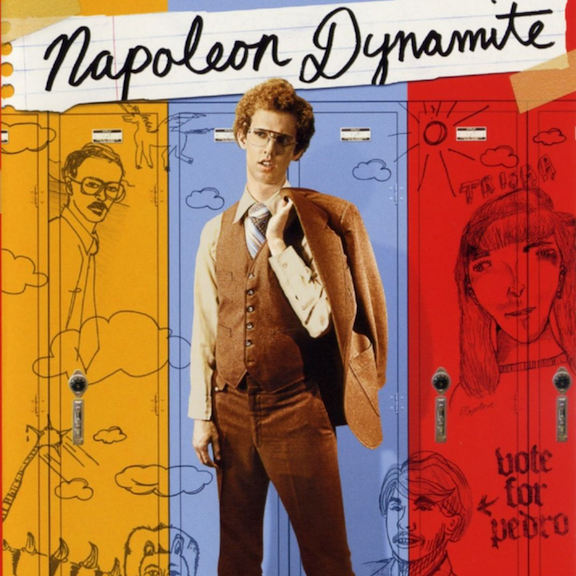 A one-of-a-kind high school comedy for the family!

Napoleon Dynamite is one of my favorite movies since I've been young, it was the first of many movies that made Jon Heder become one of my fave actors. This movie is a charming, quirky, and often very funny comedy. Truly one-of-a-kind and completely family friendly!

The description of Napoleon Dynamite, as stated on iTunes, is:

"From the rural town of Preston, Idaho, comes Napoleon Dynamite (Jon Heder). With a red 'fro, his moon boots, and illegal government ninja moves, he is a new kind of hero. His family consists of fragile brother Kip (Aaron Ruell), who's seeking his soulmate in online chat rooms; Uncle Rico (Jon Gries), who is stuck in his "glory" days of high school football; and Grandma (Sandy Martin), who enjoys going out to the dunes on her quad-runner. Napoleon spends his days drawing magical beasts, working on his computer hacking skills to impress the chicks, and begrudgingly feeding his Grandma's pet llama. When his friend Pedro (Efren Ramirez) decides to run for class president, it is Napoleon to the rescue to help him triumph over adversity."

If anyone is interested in checking out Napoleon Dynamite from Fox Searchlight, click on the image up above.

This movie is hilarious. If you haven't seen it yet, you seriously need to! It will always be a classic.

Tags:
Napoleon Dynamite, Movie, Fox Searchlight, iTunes
Leave a Note.
Must be logged in to comment
Previous Fave
Next Fave
Sharing is good
Faved February, 05 2019 by: