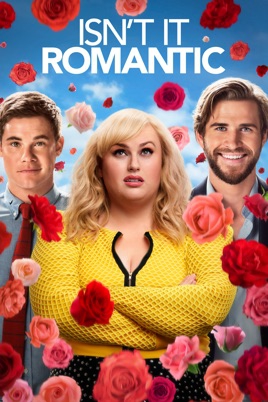 Rebel Wilson is one of my favorite actresses, she's just so funny. I watched this movie almost exclusively because she was in it, and I was not disappointed! It featured laughs and thoughtful messages in a charming rom-com satire. Not only is Rebel Wilson part of the cast, but highly popular actors and actresses such as Liam Hemsworth, Priyanka Chopra, Adam DeVine and Betty Gilpin are involved as well. It was such a great time spent watching this movie. I recommend it!

"New York City architect Natalie (Rebel Wilson) works hard to get noticed at her job, but is more likely to be asked to deliver coffee and bagels than to design the city’s next skyscraper. And if things weren’t bad enough, Natalie, a lifelong cynic when it comes to love, has an encounter with a mugger that renders her unconscious, waking to discover that her life has suddenly become her worst nightmare — a romantic comedy — and she is the leading lady."

If anyone is interested in checking out the romantic comedy Isn't It Romantic (2019) from New Line, click on the image up above.

I really recommend this romantic comedy!