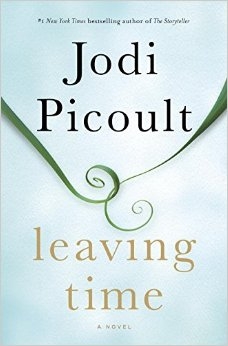 Picoult has written another page-turning novel, even as it focuses on motherhood, loss, and grief. Teenager Jenna Metcalf was just three years old when her mother disappeared from an elephant sanctuary. Ten years later, she takes up the search for her mother, Alice, by studying Alice’s decade-old journals on grieving elephants. The research itself is fascinating, the hints about Alice’s disappearance are compelling; but Jenna cannot find her mother on her own. By enlisting the help of a formerly famous—now infamous—psychic, as well as a down-and-out private detective whose career went south during the botched investigation of Alice's disappearance, Jenna forms a sort of new family to help her in her quest. As the facts begin to come together—described in alternating chapters by Jenna, the psychic, the private detective, and Alice’s journals—it all heads toward a thrilling conclusion. And, yes, there is a big twist at the end.

Hailey Jones into Books to read
over 5 years ago
Refave
Previous Fave
Next Fave
Sharing is good
Refaved October, 01 2014 by: