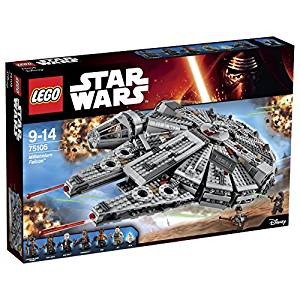 One of the coolest things about Star Wars has always been the amazing ships our favourite heroes rode off in. The most memorable being the Millennium Falcon, adapting to both the original six part Star Wars movies, and the new Star Wars: The Force Awakens reboot. LEGO has always reveled in the Star Wars license, providing amazing building kits of ships, vehicles, locations and more since the first kit was released in 1999. The newest being the LEGO Star Wars: The Force Awakens Millennium Falcon. No doubt, this building kit will be at the top of many kids wishlists this Christmas season. I know my son can't stop talking about LEGO Star Wars!

This LEGO building kit will keep your child occupied for hours of fun, building and bringing to life this unique ship. The kit comes with seven of the characters from The Force Awakens, and ten numbered bags, one un-numbered bag of plates, as well as a sticker sheet and an instruction booklet. Whether you want to spend time and help build the Millennium Falcon with your children, family or friends, this building kit is the perfect gift this holiday season for Star Wars lovers! I'll be making sure to pick the LEGO Star Wars Millennium Falcon 75105 Building Kit up for my son this Christmas.