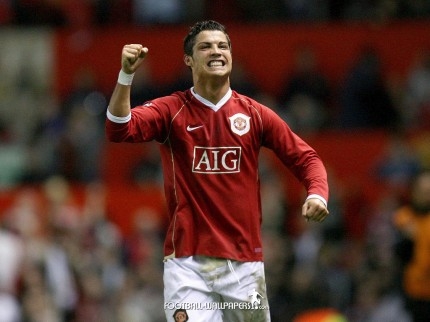 Cristiano Ronaldo dos Santos Aveiro, born 5 February 1985 in Funchal, Madeira, Portugal is commonly known as Cristiano Ronaldo, is a Portuguese footballer who plays as a forward for Spanish La Liga club Real Madrid.
Ronaldo began his career as a youth player for Andorinha, where he played for two years, before moving to C.D. Nacional. In 1997, he made a move to Portuguese giants Sporting Clube de Portugal.

Ronaldo became the most expensive footballer in history after moving from Manchester United to Real Madrid in a transfer worth £80 million (€93.9 million/$131.6 million). His contract with Real Madrid, in which he is paid €12 million per year, makes him one of the highest-paid footballers in the world.

Ronaldo holds numerous former and current scoring records, including records for most goals scored in a season for Real Madrid, most goals scored per minute in La Liga, first top European league player to reach 40 goals in a single season in two consecutive years, fastest Real Madrid player to reach one hundred league goals, and the first player ever to score against every team in a single season in La Liga.

Emily Jackson into Fave Athletes
over 6 years ago

Jana Abrahams into Sports
over 7 years ago

Blake Griffen into Greatest athletes of all time
over 7 years ago
Refave
Previous Fave
Next Fave
Sharing is good
Refaved May, 26 2014 by: