Walk the Wire by David Baldacci 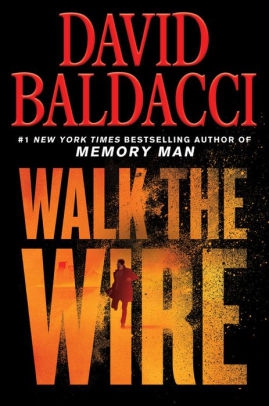 The newest thriller in the bestselling Memory Man series!

I love checking out the Barnes and Noble Bestselling list to see what books are new or currently trending. I saw that Walk the Wire by David Baldacci was currently trending so I decided to check it out. The mystery/thriller/crime genre is my personal fave, and this novel seems to be right up my alley. It sounds like a true page-turner as an FBI consultant with a perfect memory returns to solve a gruesome murder in a booming oil town in North Dakota. I have read a bit of David Baldacci's Memory Man series in the past, so I hope this book turns out as good as its reviews.

As stated on the Barnes and Noble website, the summary for Walk the Wire is:

"When Amos Decker and his FBI colleague Alex Jamison are called to London, North Dakota, they instantly sense that the thriving fracking town is ripe for trouble. The promise of a second gold rush has attracted an onslaught of newcomers all hoping for a windfall, and the community is growing faster than houses can be built. The sudden boom has also brought a slew of problems with it, including drugs, property crimes, prostitution — and now murder.

Decker and Jamison are ordered to investigate the death of a young woman named Irene Cramer, whose body was expertly autopsied and then dumped in the open — which is only the beginning of the oddities surrounding the case. As Decker and Jamison dig into Irene's life, they are shocked to discover that the woman who walked the streets by night as a prostitute was a teacher for a local religious sect by day — a sect operating on land once owned by a mysterious government facility that looms over the entire community.

London is a town replete with ruthless business owners, shady government officials, and religious outsiders, all determined to keep their secrets from coming out. When other murders occur, Decker will need all of his extraordinary memory and detective skills, and the assistance of a surprising ally, to root out a killer and the forces behind Cramer's death. . . before the boom town explodes."

If anyone else is interested in checking out the book Walk the Wire by David Baldacci, click the image up above! It is currently on sale for 30% off.

I can't wait to read this novel and see how it turns out.

Tags:
Walk the Wire, Novel, Book, David Baldacci, Thriller, Crime, Mystery, Barnes and Noble,
Leave a Note.
Must be logged in to comment
Previous Fave
Next Fave
Sharing is good
Faved April, 24 2020 by: