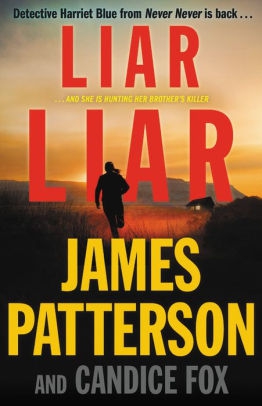 The third riveting thriller in the Harriet Blue Series!

I can't wait to read Liar Lair by James Patterson! It is the Harriet Blue Series #3, in which Det. Harriet Blue from Never Never is back! She's on the run despite being a principled cop and desperate to find her brother's killer. It's going to be such a good read, I think. James Patterson never lets me down!

As stated on the Barnes & Noble website, the summary for Liar Liar is:

In the space of a week, she has committed theft and fraud, resisted arrest, assaulted a police officer, and is considered a dangerous fugitive from the law.

It's all because of one man, Regan Banks. He viciously killed the only person in the world who matters to Harriet-and he plans to kill her next.

As she recklessly speeds toward the dark side-and finally crosses it-Harriet won't stop until Regan pays for the many lives he has taken."

If anyone else is interested in checking out the book Liar Liar by James Patterson, please click the image up above!

I can't wait to give this a read!