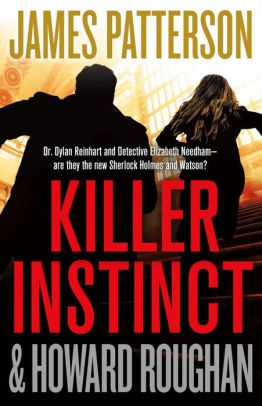 One of fall's most anticipated books!

I recently saw that Killer Instinct by James Patterson was released in the past few days, and I immediately recognized the two characters, Dr. Dylan Reinhart and Detective Elizabeth Needham from the top-rated CBS series. In this novel, it seems they reunite to stop one of the most sinister plots against New York since the tragedy of 9/11.

As stated on the Barnes and Noble website, the summary for Killer Instinct is:

"The murder of an Ivy League professor pulls Dr. Dylan Reinhart out of his ivory tower and onto the streets of New York, where he reunites with his old partner, Detective Elizabeth Needham. As the worst act of terror since 9/11 strikes the city, a name on the casualty list rocks Dylan's world. Is his secret past about to be brought to light?

As the terrorist attack unfolds, Elizabeth Needham does something courageous that thrusts her into the media spotlight. She's a reluctant hero. And thanks to the attention, she also becomes a prime target for the ruthless murderer behind the attack.

Dylan literally wrote the book on the psychology of murder, and he and Elizabeth have solved cases that have baffled conventional detectives. But the sociopath they're facing this time is the opposite of a textbook case. There's no time to study for the test he's about to give them. And if they fail, they die."

If anyone else is interested in checking out the book Killer Instinct by James Patterson, please click the image up above! It is currently on sale for 40% off, I can't wait to purchase mine.

This book truly sounds thrilling, like a true page-turner. I look forward to reading it!

Tags:
Killer Instinct, Novel, Book, James Patterson,
Leave a Note.
Must be logged in to comment
Previous Fave
Next Fave
Sharing is good
Faved September, 26 2019 by: