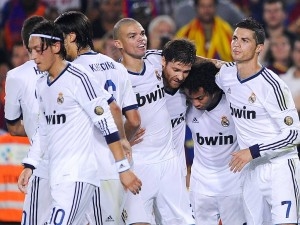 Real Madrid, is a professional football club based in Madrid, Spain.
It was founded in 1902 as Madrid Football Club and has traditionally worn a white home kit since. The word Real is Spanish for royal and was bestowed to the club by King Alfonso XIII in 1920.
The club is the richest football club in terms of annual revenue, generating €479.5million in 2011.
The team has played its home matches in the 85,454-capacity Santiago Bernabéu Stadium in Madrid since 1947.
Real Madrid has won a record 32 La Liga titles, 18 Copas del Rey, 9 Supercopas de España, 1 Copa Eva Duarte and 1 Copa de la Liga. Internationally it has won a record nine European Cup/UEFA Champions League titles and a joint record three Intercontinental Cups, as well as two UEFA Cups, and one UEFA Super Cup.