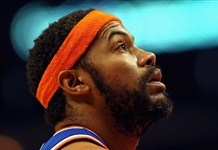 New York Knicks forward Rasheed Wallace retired again from the NBA on Wednesday after he was unable to recover from a left foot injury.

Shortly after coach Mike Woodson said Wallace was still struggling with soreness, the Knicks made the announcement in a press release.

"Rasheed has given this team everything he had," Woodson said in the statement. "He is a winner, true professional and leader on and off the court. Due to his injury, he will not be available to play for us during the playoffs. We owe this season's success to veterans like Rasheed."

It's a damaging blow for the Knicks, who loaded up on veteran big men this season but have now lost two of them for good in Kurt Thomas and Wallace, and have gotten almost nothing from Marcus Camby.