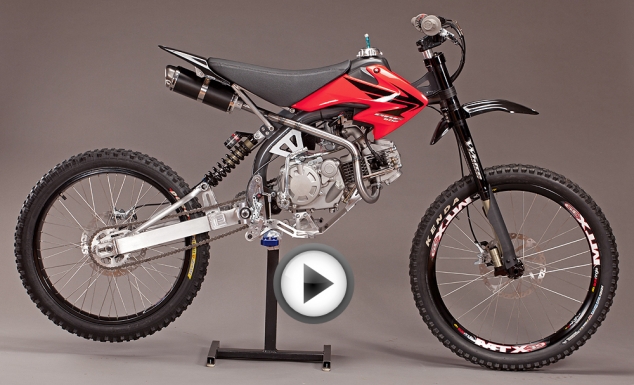 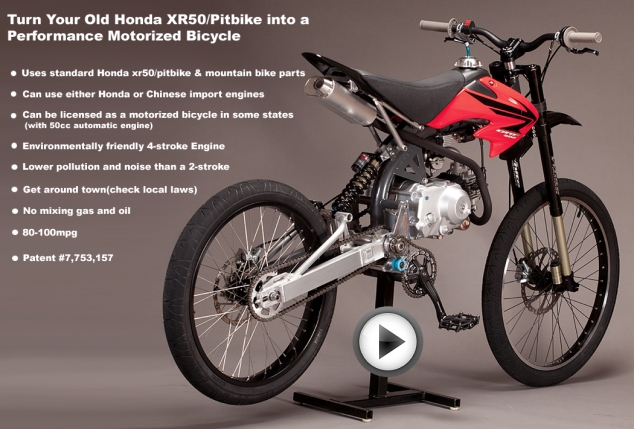 Love to mountain bike? But, hate to peddle?

Motorized bicycles have been around for a long time, but it isn't often that they're as cool as the off-road-oriented contraption called the Motoped. Motopeds of Santa Cruz, California, has developed a frame kit that will transform your bike into this mountain bike/moto hybrid.

Think mountain bike and a small four-stroke engine from a Honda CRF50, all tied together by a custom spine. The frame kit (including swingarm) will accept a wide range of Honda and Chinese knock-off engines ranging in displacement from 49 to 155cc.

All you need to bring to the project are a Honda 50-190cc motor, gas tank, seat, and a couple other parts, along with forks, brakes, wheels, tires, cranks, and pedals from a mountain bike. The kit comes with everything else: frame, swing arm, jack shaft, bottom bracket, rear hub, sprockets, and exhaust.

Being able to ride quietly on the sidewalk, switch on the four-stroke Honda engine, then pretend you're Ricky Carmichael for the rest of the way home sounds like great fun to us,

Boston, MA, US
40 followers, following 2
Follow
Faved into the Collection: