The Queen's Bargain by Anne Bishop 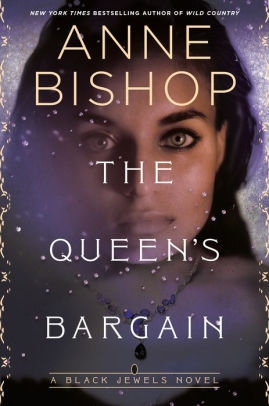 The newest entry in the NYT bestselling fantasy saga!

I've been finding more time to read recently, so I have spent a good amount of time looking up new books I would like to purchase and read from Barnes and Noble. The novel The Queen's Bargain by Anne Bishop is the newest to catch my eye. It sounds so thrilling!

As stated on the Barnes and Noble website, the summary for The Queen's Bargain is:

"After a youthful mistake, Lord Dillon's reputation is in tatters, leaving him vulnerable to aristo girls looking for a bit of fun. To restore his reputation and honor, he needs a handfast--a one-year contract of marriage. He sets his sights on Jillian, a young Eyrien witch from Ebon Rih, who he believes has only a flimsy connection to the noble society that spurned him. Unfortunately for Dillon, he is unaware of Jillian's true connections until he finds himself facing Lucivar Yaslana, the volatile Warlord Prince of Ebon Rih.

Meanwhile, Surreal SaDiablo's marriage is crumbling. Daemon Sadi, the Warlord Prince of Dhemlan, recognizes there is something wrong between him and Surreal, but he doesn't realize that his attempt to suppress his own nature in order to spare his wife is causing his mind to splinter. To save Daemon, and the Realm of Kaeleer if he breaks, help must be sought from someone who no longer exists in any of the Realms--the only Queen powerful enough to control Daemon Sadi. The Queen known as Witch.

As Jillian rides the winds of first love with Dillon, Daemon and Surreal struggle to survive the wounds of a marriage turned stormy--and Lucivar has to find a way to keep everyone in his family safe...even from each other."

If anyone else is interested in checking out the book The Queen's Bargain by Anne Bishop, click the image up above!

I can't wait to pick up this book and read it!

Tags:
The Queen's Bargain, Book, Novel, Anne Bishop, Barnes and Noble
Leave a Note.
Must be logged in to comment
Previous Fave
Next Fave
Sharing is good
Faved April, 07 2020 by: