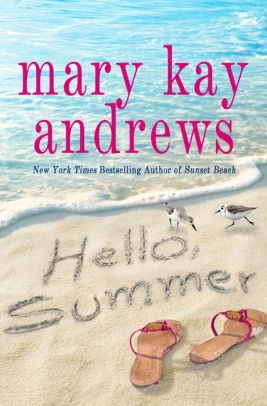 The newest blockbuster from NYT best selling author and Queen of the Beach Reads!

With summer just about in full swing, I have been craving a riveting new drama novel to read while out in the sun. Hello, Summer by Mary Kay Andrews was listed on Barnes and Noble as one of the hottest novels to read this season, and after reading the summary, I find myself quite intrigued! I have placed an order for this novel and cannot wait to read it soon!

As stated on the Barnes and Noble website, the summary for Hello, Summer is:

Conley Hawkins left her family’s small town newspaper, The Silver Bay Beacon, in the rearview mirror years ago. Now a star reporter for a big-city paper, Conley is exactly where she wants to be and is about to take a fancy new position in Washington, D.C. Or so she thinks.

When the new job goes up in smoke, Conley finds herself right back where she started, working for her sister, who is trying to keep The Silver Bay Beacon afloat—and she doesn’t exactly have warm feelings for Conley. Soon she is given the unenviable task of overseeing the local gossip column, “Hello, Summer.”

Then Conley witnesses an accident that ends in the death of a local congressman—a beloved war hero with a shady past. The more she digs into the story, the more dangerous it gets. As an old heartbreaker causes trouble and a new flame ignites, it soon looks like their sleepy beach town is the most scandalous hotspot of the summer."

If anyone else is interested in checking out the book Hello, Summer by Mary Kay Andrews, click the image up above! It is currently on sale for 17% off.

I can't wait to read this novel outside on the patio with an ice cold glass of lemonade.