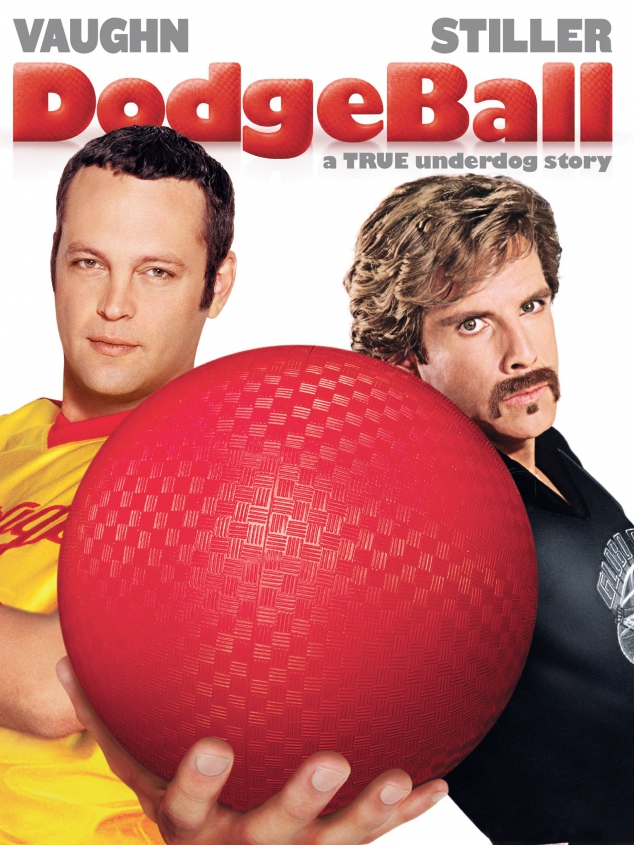 A worthy spiritual successor to the goofball comedies of the 1980s!

Dodgeball: A True Underdog Story is a profane and splendidly silly movie! It is so hilarious, think Bad News Bears crossed with Happy Gilmore - for an overall goofball comedy.

The description of Dodgeball: A True Underdog Story, as stated on iTunes, is:

"Dodgeball: A True Underdog Story, is a film that grabs life by the ball. Peter LaFleur (Vince Vaughn), is a charismatic underachiever and proprietor of a rundown gym called Average Joe’s. The facility’s clientele of decidedly less-than-average Joes is made up of a self-styled pirate, a scrawny nerd (Justin Long) who dreams of impressing an unattainable cheerleader, an obsessive aficionado of obscure sports, a dim-witted young man, and a cocky know-it-all who, of course, really knows nothing. Peter’s humble gym catches the eye of White Goodman (Ben Stiller), the power-mullet-sporting, Fu-Manchu-d, egomaniacal owner of Globo Gym, a gleaming monolith of fitness. White intends to take over Average Joe’s, and Peter’s non-existent bookkeeping is making it all too easy for him. A foreclosing bank has stationed attorney Kate Veatch (Christine Taylor) inside Average Joe’s to finalize Globo’s takeover of the gym. Peter’s boyish charm wins her over and Kate joins his team of social rejects to beat the odds."

If anyone is interested in checking out Dodgeball: A True Underdog Story from 20th Century Fox, click on the image up above. If you like comedies movies, you'll love this one!

This is one of my fave comedy movies during the 2000s. I really recommend it!

Tags:
Dodgeball: A True Underdog Story, Dodgeball, Movie, 20th Century Fox
Leave a Note.
Must be logged in to comment
Previous Fave
Next Fave
Sharing is good
Faved March, 12 2019 by: