The President's Daughter by Bill Clinton and James Patterson 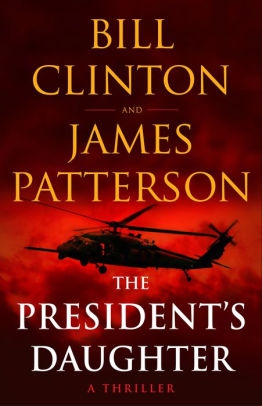 A fast-action adventure and ambitious thriller from a former president and a New York Times bestselling author!

I really enjoyed the author's first collaboration together, The President Is Missing, so I was so thrilled to see another recent novel by Bill Clinton and James Patterson. The reviews are stellar and it comes off as a novel that truly only a former president could write and action that only someone like Patterson could dream up.

As stated on the Barnes and Noble website, the summary for The President's Daughter is:

"A rocket ride of a thriller—the new blockbuster by President Bill Clinton and James Patterson, “the dream team” (Lee Child).

Every detail is accurate—
because one of the authors is President Bill Clinton.
The drama and action never stop—
because the other author is James Patterson.

Matthew Keating, a one-time Navy SEAL—and a past president—has always defended his family as staunchly as he has his country. Now those defenses are under attack.

A madman abducts Keating’s teenage daughter, Melanie—turning every parent’s deepest fear into a matter of national security. As the world watches in real time, Keating embarks on a one-man special-ops mission that tests his strengths: as a leader, a warrior, and a father."

If anyone else is interested in checking out the book The President's Daughter by Bill Clinton and James Patterson, click the image up above! The book is currently on sale for 30% off.

I am really looking forward to reading this novel. I just have a few others to read first and then I will be diving in. Hopefully it's as great as the reviews have said.