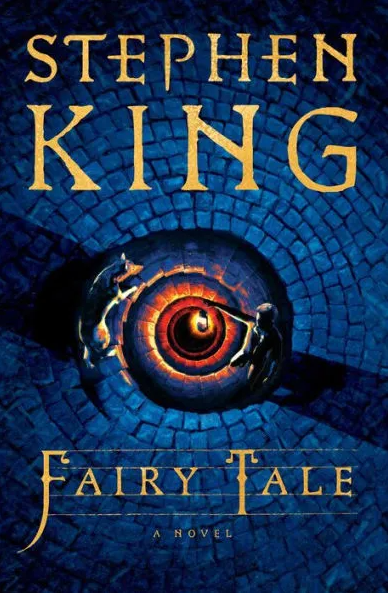 While browsing the upcoming releases for the month of September, I came across the listing for Fairy Tale by Stephen King. Not only am I already a big fan of Stephen King, but the unique cover and nice pre-order sale really drew me in. I will definitely have to snag a copy for my autumn reading!

As stated on the Barnes and Noble website, the summary for Fairy Tale by Stephen King is:

"Charlie Reade looks like a regular high school kid, great at baseball and football, a decent student. But he carries a heavy load. His mom was killed in a hit-and-run accident when he was ten, and grief drove his dad to drink. Charlie learned how to take care of himself—and his dad. When Charlie is seventeen, he meets a dog named Radar and her aging master, Howard Bowditch, a recluse in a big house at the top of a big hill, with a locked shed in the backyard. Sometimes strange sounds emerge from it.

Charlie starts doing jobs for Mr. Bowditch and loses his heart to Radar. Then, when Bowditch dies, he leaves Charlie a cassette tape telling a story no one would believe. What Bowditch knows, and has kept secret all his long life, is that inside the shed is a portal to another world.

King’s storytelling in Fairy Tale soars. This is a magnificent and terrifying tale in which good is pitted against overwhelming evil, and a heroic boy—and his dog—must lead the battle.

Early in the Pandemic, King asked himself: “What could you write that would make you happy?”

“As if my imagination had been waiting for the question to be asked, I saw a vast deserted city—deserted but alive. I saw the empty streets, the haunted buildings, a gargoyle head lying overturned in the street. I saw smashed statues (of what I didn’t know, but I eventually found out). I saw a huge, sprawling palace with glass towers so high their tips pierced the clouds. Those images released the story I wanted to tell.”"

If anyone else is interested in checking out the book Fairy Tale by Stephen King, click the image up above! It's currently on sale for 30% off.

- Upcoming pre-order releasing this September
- Newest fantasy novel by legendary storyteller Stephen King
- Featuring horror and the universal appeal of good vs. evil
- On sale for 30% off
- Available as a hardcover, audiobook, large print, NOOK book, and audio CD

I look forward to being able to check out this novel! I hope it once again exceeds my expectations set my Stephen King in his previous works. I think it will be a great autumn read. Give it a look if you're interested in fantasy, horror, or a tale of good vs. evil!