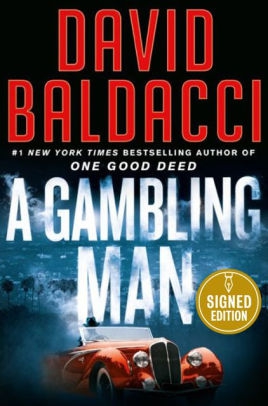 The newest novel by one of the all-time best thriller authors!

I'm a big fan of David Baldacci. He writes such spectacular thriller novels. I regard him as a master story teller, it's no wonder he's a New York Times Bestselling Author. I was very pleased to see on the Barnes and Noble site that his newest book, A Gambling Man, would be released shortly and that there would even be an exclusive signed edition!

As stated on the Barnes and Noble website, the summary for A Gambling Man is:

"The 1950s are on the horizon, and Archer is in dire need of a fresh start after a nearly fatal detour in Poca City. So Archer hops on a bus and begins the long journey out west to California, where rumor has it there is money to be made if you’re hard-working, lucky, criminal—or all three.

Along the way, Archer stops in Reno, where a stroke of fortune delivers him a wad of cash and an eye-popping blood-red 1939 Delahaye convertible—plus a companion for the final leg of the journey, an aspiring actress named Liberty Callahan who is planning to try her luck in Hollywood. But when the two arrive in Bay Town, California, Archer quickly discovers that the hordes of people who flocked there seeking fame and fortune landed in a false paradise that instead caters to their worst addictions and fears.

Archer’s first stop is a P.I. office where he is hoping to apprentice with a legendary private eye and former FBI agent named Willie Dash. He lands the job, and immediately finds himself in the thick of a potential scandal: a blackmail case involving a wealthy well-connected politician running for mayor that soon spins into something even more sinister. As bodies begin falling, Archer and Dash must infiltrate the world of brothels, gambling dens, drug operations, and long-hidden secrets, descending into the rotten bones of a corrupt town that is selling itself as the promised land—but might actually be the road to perdition, and Archer’s final resting place."

If anyone else is interested in checking out the book A Gambling Man (Signed Book) by David Baldacci, click the image up above!

I am looking forward to spending a nice relaxing Sunday just diving into this book. I cannot get enough of David Baldacci's work!